It was great news today to hear the 2016 Nobel Prize in Chemistry was awarded to some pioneers in the field of supramolecular chemistry: Jean-Pierre Sauvage, J Fraser Stoddart and Bernard Feringa. During my PhD studies, I read the work of Sauvage and Stoddart a lot for inspiration; they are constantly producin 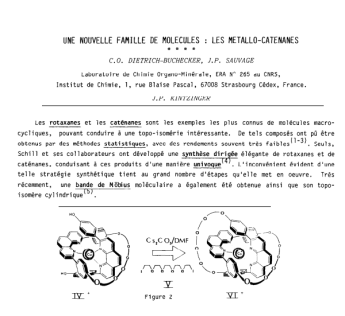 g beautiful and elegant structures from discrete molecular units interacting in controlled ways. While most of my PhD ended up focussing on lanthanide-directed self assembly and luminescent compounds, I was always chasing the goal of interlocked structures and remember being fascinated by Sauvage’s early results describing the first metal-directed catenanes (Tetrahedron Letters 1983), mechanically interlocked rings with no chemical bonds between the two molecular components. This article laid the groundwork for the tiny molecular machines for which the trio were given the prestigious award today. Stoddart’s contributions to controlling rotaxane movement and Feringa’s publication of the first ‘molecular motor’ were remarkable breakthroughs, but the elegance of interlocked systems has fascinated me since I first saw them and I was delighted to finally publish some of my own work on catenanes in Angewandte Chemie this year, contributing in a small way to the ever-expanding supramolecular field.

To end this post, I’ll add a quote from my PhD supervisor Prof Thorri Gunnlaugsson (Trinity College Dublin) talking today about Sir JF Stoddart, a man he greatly admires and who received an honorary doctorate from Trinity a few years ago:

Speaking about the significance of the work that led to him sharing the 2016 Nobel Prize, Professor of Chemistry at Trinity, Thorri Gunnlaugsson, said: This is truly a fantastic day for chemists and specially for those of us who are involved in the development of supramolecular and nano-chemistry. The development of molecules that are functional and can carry out actions such as programmed operations, and can mimic macroscopic function on the nanoscale, such as that of machines, has been at the heart of this area of chemistry.”

“Today’s announcement of the Nobel Prize in Chemistry being awarded to Professors Stoddart, Sauvage and Feringa, for their development of molecular machines, acknowledges the major scientific achievement made to date in this important field.”